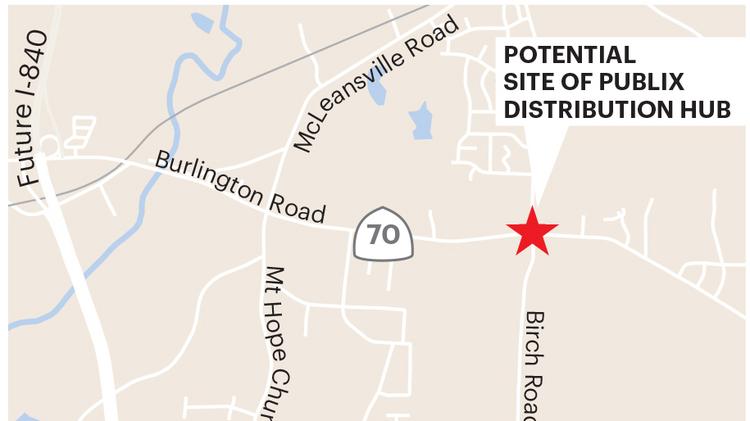 Publix has paid $28.5 million for land in east Greensboro that will be the site of its planned 1.8 million-square-foot distribution center.

Carroll could not immediately be reached by Triad Business Journal to comment.

The property sold is in the unincorporated community of McLeansville. The land is near the intersection of Birch Creek Road and U.S. 70.

The seller was East GSO Holdings LLC, an entity managed by Carroll, according to N.C. Secretary of State records. The buyer was Publix Super Markets Inc.

Publix announced Aug. 29 that it had picked Greensboro for a $400 million distribution center expected to create more than 1,000 jobs with an average salary of $44,000.

TBJ reported before Publix made its decision that the company was considering a 350-acre site – land either controlled or owned by Carroll – in east Greensboro for a state-of-the-art distribution center.

The state, county and city have approved incentives worth millions in return for Publix’s investment.

The state has approved a $15.9 million incentives package, which includes $1.3 million in training grants and $1.5 million from the state’s utility account, which funds rural infrastructure projects.

Earlier this year, Guilford County commissioners agreed to refund Publix 80 percent of county property tax the company would pay over 10 years – an estimated $17 million at the current tax rate. The Greensboro City Council also approved a similar agreement that will translate to between $14.7 million and $17.7 million in incentives.

The city has also agreed to invest $3 million in sewer infrastructure at the site.

According to a city report, a Publix distribution center will produce an incremental increase in tax revenue of $19.9 million over 10 years.