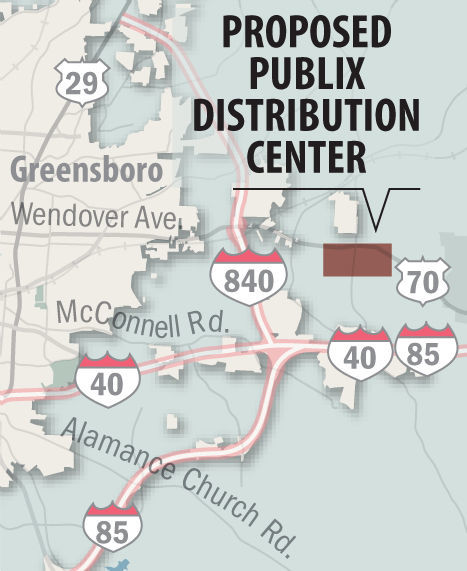 The center would go on land that is currently owned or controlled by Greensboro developer Roy Carroll.

At 1.8 million square feet, it would be one of the largest distribution centers in the Piedmont Triad and would sit on 350 acres near the intersection of Birch Creek Road and U.S. 70 in eastern Greensboro.

It’s especially good economic development news in light of the January announcement that Toyota-Mazda would be choosing Alabama over Greensboro to build its joint factory.

Publix has asked the City Council to grant it up to $17.7 million in incentives and $3 million worth of water and sewer lines to the land.

According to a notice that ran Friday in the News & Record, the council will hold a public hearing on the request at its regular meeting at 5:30 p.m. on March 20.

In a written statement to the News & Record, Publix suggested the decision is still tentative. “We are currently evaluating several potential sites, including a site in Greensboro. As with all potential sites, we are in the process of conducting our due diligence, which does include pursuing available incentives.”

Florida-based Publix operates its distinctive grocery stores in Winston-Salem, High Point, Clemmons and has plans to open one at the future Grandover Village shopping center in Jamestown. The company had sales of $34.6 billion with profits of $2.3 billion in fiscal 2017.

Carroll said Friday it has been a long process to land the distribution center and that there are still details to be worked out.

But Carroll is happy that the company has reached the stage of asking for incentives.

It was stressful, he said, because he wanted to see the city land such a significant employer.

“I’ve probably laid awake and prayed about this more than anything I’ve known because of what it means for Greensboro,” he said. “This is the biggest job announcement (in Greensboro) in my opinion since HondaJet.”

Carroll, who has planned to develop the land for 12 to 15 years, has been working for several months to do studies and other things to help prepare the site.

He said that economic development officials from the state, including Gov. Roy Cooper, were involved in helping Publix find a location for its distribution center.

The recruitment process was as secretive as it gets, he admitted, with consultants doing most of the work with local recruiters until they revealed Publix was the company behind the requests.

“It’s a big, big win anyway you look at it,” Carroll said.

The jobs would be especially good for the region, Carroll added, because he believes the company has a tradition of treating its employees well.

Publix is the nation’s largest employee-owned company and Carroll said that means many workers of modest means can build significant investments through the years.

“These are going to be great jobs if we’re able to land it,” Carroll said.

Local economic development officials had laid the groundwork for such a major jobs prize in recent years as they’ve gotten to know property owners like Carroll and the effort has paid off.

“This is the way it’s supposed to work,” Carroll said.

The public notice states the company “intends” to file a petition to annex the property into the city limits.

“These are high-quality jobs that will pay above the median income,” Mayor Nancy Vaughan said. “I can’t remember the last time we talked about an incentive for 1,000 jobs.”

Vaughan said she believes the incentives and infrastructure measures stand a good chance of being passed by council.

“Publix is an employee-owned store and I think that’s very important,” she said. “They invest in their employees.”

Guilford County Commissioner Jeff Phillips wouldn’t say whether Publix has been in touch with the county for possible incentives.

“I can’t confirm or deny any action at this time, but if any company that garners the respect and stature of Publix should approach our board asking us to consider a request that would bring hundreds of good-paying jobs to our community, we would be open to considering the specifics,” he said.